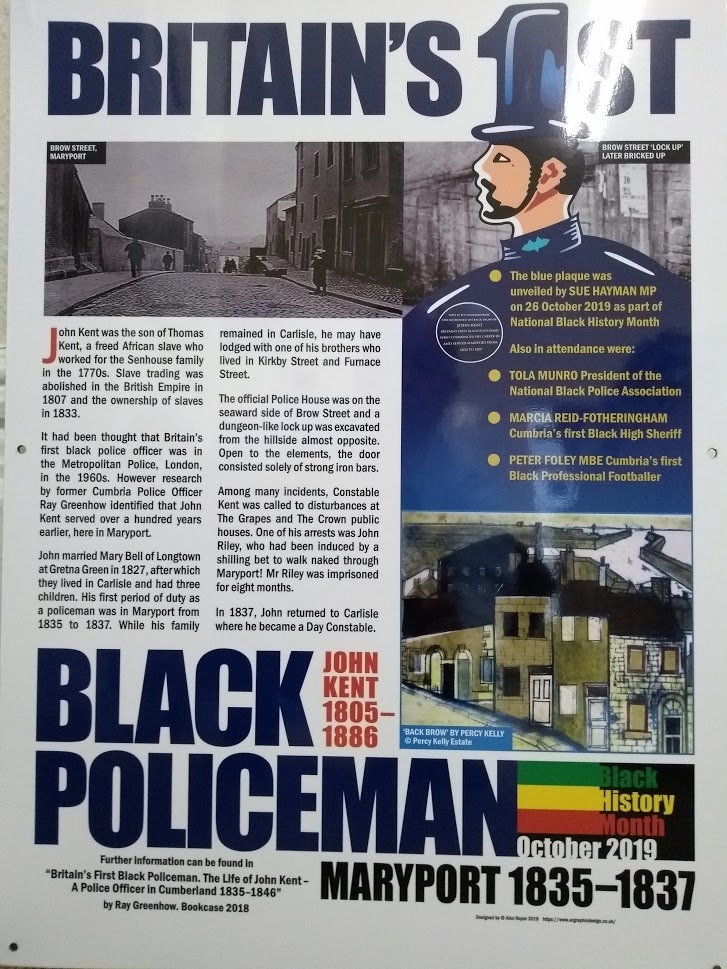 Britain’s first black policeman served his first period of duty in Maryport between 1835 & 1837. John Kent was the son of Thomas Kent, a freed African slave who worked for the Senhouse family in the Carlisle area in the 1770s. John served his first period of duty as a policeman in Maryport between 1835 & 1837. It is thought that he resided with his brothers Joseph & Thomas on Furnace Street & Kirkby Street in Maryport at this time.

Prior to research by former Cumbria Police Officer Ray Greenhow, it had been thought that Britain’s first black police officer worked for the Metropolitan Police in London in the 1960s. Given that it was over a hundred years earlier when John Kent served, it takes little to imagine the difficulties he must have faced in terms of tolerance & respect for racial diversity.

The Police house was just below the Wesleyan Chapel & subsequently, a lock-up was provided. Dungeon-like in appearance, it was excavated from the hillside almost opposite the constable’s house. The door consisted solely of strong iron bars.

A number of incidents of Constable Kent’s execution of his duties are recorded; in one noteworthy one, John was called to attend incidents at The Grapes and the Crown public houses in Maryport. One of his arrests was John Riley, who had been induced by a shilling bet to walk naked through Maryport! Mr Riley was imprisoned for eight months.